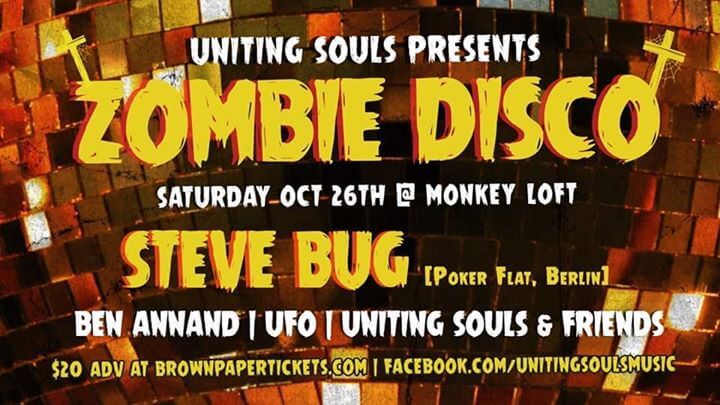 featuring one of Germany’s pioneers of house & techno!

Zombie Art Installation in the Green Room
by Calyn Kuefner

Uniting Souls’ ZOMBIE DISCO parties have become a Halloween tradition at Monkey Loft, with multiple rooms, outlandish costumes, zombie art installations, live visuals, and all your friends on the dance floor, getting down to wicked grooves by local, national & top-tier international talent! Come get your boogie on & join in on the holiday fun!!

STEVE BUG
Steve Bug is one of electronic music’s true originals. His relentless commitment to quality – both in his own work and in the many producers he has championed – has made him one of the world’s most revered artists and curators, and along with his labels Poker Flat, Audiomatique, Dessous Recordings, Traffic Signs or Raw Elements has made a sizeable contribution to building the European house and techno scene as we know it.

A dedicated, energetic and constantly innovative talent, Resident Advisor once called Steve Bug the “gentleman of techno” referring to his sense of duty and dependability as one of the world’s most renowned DJs and producers. That same professionalism that means he’s hardly ever missed a DJ gig is evident in his work as a composer, producer and owner of the Poker Flat Recordings label: a label whose influence on house and techno cannot be overstated. Every step he takes is well considered, but always tempered with his own fine sense of humour and innate love for his craft.

Having grown up in Germany’s techno and acid-house hey- day, Steve Bug’s love for a perfect groove is as apparent now as it was back then. His DJ skills and a keen, innovative ear led him not down the typical path of the early nineties trance and harder dance scene, but instead towards a fresher, hybrid sound–merging stripped deep house, tweaked out acid and more minimal forms of techno and electronic music.

Although dedicated to his own labels – first and foremost the aforementioned Poker Flat – Steve’s talents have naturally attracted the attention of other imprints. Bedrock, Knee Deep In Sound, Minus, Cocoon, Ovum, Kompakt and Defected are just some of the labels that have championed original tracks and remixes that are rightly regarded as timeless classics.

Steve is also one of the few electronic artists capable of put- ting out a ‘proper’ album. Having released no fewer than six full length LPs over the last two decades, his latest Paradise Sold alongside Langenberg – a full ten-track album of exquisitely crafted house music on Poker Flat – was released in 2018 to critical acclaim, and described as “elegantly euphoric” by Mixmag.

Steve continues to tour relentlessly, maintaining a loyal following around the world and more than two decades into his storied career, Steve Bug still remains a singularly talented artist. Long may his reign continue.

“UNITING SOULS has contributed to setting standards as to what the Seattle electronic music community has to offer on a local & international level. It is because of organizations like Uniting Souls that Seattle is a favorite stop among touring electronic musicians.

With e-mail, smart phones, cheap flights, declining costs in music production, and the explosion of information technology, the face of the global music community is rapidly changing, but it is collectives like Uniting Souls that are evolving right alongside to help define and retain humanness in the often impersonal world we’ve created.”
– The Stranger