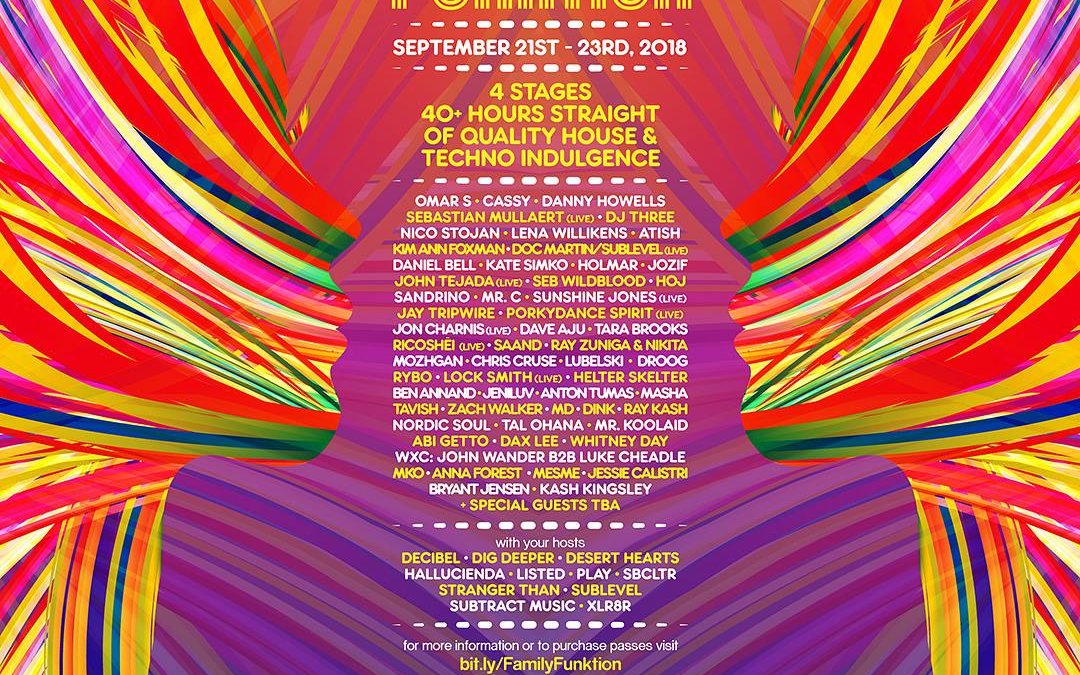 .: ABOUT FAMILY FUNKTION :.
Decibel Festival and Listed Productions are excited to announce the debut of #FAMILYFUNKTION in Los Angeles. The multi-day festival will feature 60+ elite house and techno artists (see full artist list below), performing across four stages over 40+ hours straight. In an effort to unite the vast underground dance music community, FAMILY FUNKTION has enlisted the support of 10 hosts, each bringing with them a unique sound, vision and audience. Various hosts include labels, promoters and media outlets. Aside from listed and Decibel, the party hosts will include the following: Desert Hearts, Hallucienda, Sublevel, XLR8R, Subtract Music, SBCLTR LA, Dig Deeper LA and Stranger Than;.

In terms of production and venue amenities, FAMILY FUNKTION will be transforming the historic two-story, eight room venue into a veritable playground for the senses; complete with Funktion-One Sound across all stages, visual art that includes projection mapping, audio/visual installations, lighting/lasers, decor by talented set designers/artists and a curated selection of food and merchandise vendors. Come decompress with the finest beings on the planet. This party was made with the intention of spreading good vibes, pure love and family in mind
�

VENUE HISTORY
Jewel’s Catch One was the oldest Black owned disco in America thanks to owner Jewel Thais-Williams, who stood up against hate and discrimination for 42 years. The story of Jewel and “The Catch” is one of four decades of music, fashion, celebrity, and activism that helped change the course of Los Angeles by breaking down racial, social, and cultural barriers. One of the original safe spaces for both the LGBTQ and Black communities, Jewel’s Catch One also served as a refuge for many during the AIDS crisis. As Jewel’s club grew to become known as the “unofficial Studio 54 of the West Coast,” Jewel became a national role model for how to fight discrimination and serve the less fortunate. When it opened in 1973, the club was one of the first black discos in the United States, and was for a long time the major black gay bar in Los Angeles. When the club opened it became a hub for a diverse population of performers including Sylvester, Whitney Houston, Luther Vandross, Janet Jackson, Donna Summer, Whoopi Goldberg, Rick James and Madonna.

In 2018 Ava Duvernay bought the rights to and sold the Jewel’s Catch One Documentary to Netflix. If you haven’t watched the film, it’s an excellent story that offers deeper insight into the venue and Jewel herself http://www.jewelscatchonedocumentary.com

ABOUT DECIBEL
Founded in 2003, Decibel Festival has become a unique platform for exposing attendees to leading-edge multimedia art from around the globe. With a focus on live performance, interactive multimedia art, state-of-the-art sound and technology based education; Decibel has solidified itself as one of the premier electronic music festivals and promotional organizations in the world. The five-day festival program averages over 25,000 attendees a year. Outside of the annual festival program, dB Events produces over 60 one-off events, ranging from intimate club performances to massive international festival stages. With an average attendance of 450 per club event, dB Events bring in an additional 27,000 attendees year round. For more information visit our events page at http://dBFestival.com/events

In addition, Decibel has hosted stages at several influential festivals across the globe, including Movement (Detroit), Dimensions (Croatia) and MUTEK (Montreal).

ABOUT LISTED
Founded in 2005, listed productions​ has been throwing parties for over 12 years and has steadily expanded its reach to become an integral part of the dance music scene in North America and abroad. Each listed experience is carefully curated for its ​music, vibe​, ​décor and setting​. Our parties have always been about the small details and straight up quality dance music.

In addition to producing events, listed created an artist agency, listed Bookings, to support a small, cultivated roster of artists who are at home playing any listed Productions event. The agency has since taken on a life of its own, highlighting and passionately advocating for US and European artists who reflect listed’s values and respect for the music to audiences throughout North America and the world.