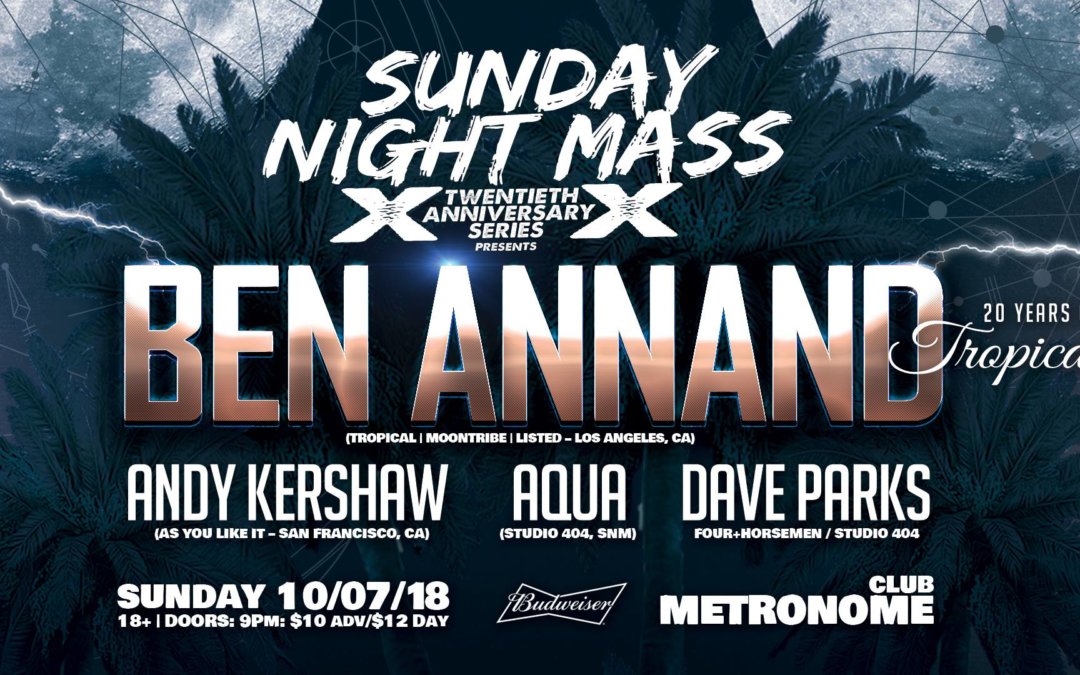 Nexus Artists, Club Metronome in association with Budweiser are pleased present the SECOND installment of the “20 YEARS OF SUNDAY NIGHT MASS” SERIES, dedicated to celebrating 20 years of electronic music, in the Green Mountains of Vermont.

Please Join us for some of the most high-powered showcases we have ever done, happening during this once in a lifetime series…

In his zone from deep house to techno, Ben Annand pairs impeccably smooth mixing skills with a dynamic style that keeps the music moving, often flowing over breakdowns and always spending most of his time in the mix.

“For me, a great mix is the interplay of 2 unique pieces of music, creating greater than the sum of the parts – and a great set weaves those mixes into a musical flow you can’t help but lose yourself in on the dance floor. Technology changed the game a lot but the goal remains the same.”

Ben learned to mix in 1996 and just 2 years later became resident DJ at the famed Moontribe Gathering, and started his own production company, Tropical. The first half of his career was mostly focused on DJing abroad, leading to 13 trips to Moscow’s Propaganda club, travel all over Russia, Spain, and Mexico, an appearance at Wiggle at Fabric in London and two at the Labyrinth Festival in Japan.

After marrying his love Jessica in 2009, Ben refocused efforts more locally, and is now one of the top West Coast festival DJs in existence, with recent appearances at Oregon Eclipse, Motion Notion (Can), Cascadia (WA), Lightning in a Bottle, Sunset Campout, Desert Hearts (CA), among others.

Celebrating its 20th anniversary this year, Tropical has evolved to 500 person sold-out boat parties in the summer and the legendary Tropical Oasis Retreat which has brought together top artists from the West Coast 6 times in California and most recently, Hawaii.

Let’s give BEN ANNAND (MR. ANNAND) a warm welcome as he returns to play Vermont for the first time since 2002. It’s only fitting that Ben join us for the 20th Anniversary Series of Sunday Night Mass as he celebrates 20 years of his amazing Tropical journey.

ANDY KERSHAW a.k.a. “ANDY KAOTIK”
AS YOU LIKE IT – SAN FRANCISCO, CA

Andy’s contributions to dance culture and community over the years are numerous. Sometimes label manager, sometimes promoter, always a DJ, he has been on a larger radar as of late as a doer and community figurehead. Notable recent achievements include: co-founder and label manager of 3AM Devices, prominent contributor to the globally-respected SF outfit As You Like It, and resident DJ at Slinky – California’s longest running House Music campout. Cosmic Disco, launching early 2018, is his latest project – both a label and a party whose name personifies Andy’s sound: “From Disco to Techno, with all the House in between.”

“It is important to me that posted mixes and set recordings properly represent my range – particularly the slower deeper edits set recordings as they are the result of countless hours of digging, trial, and error. Getting the message out to promoters that they can plug me into any time slot, anywhere, and that it will work without worry, is certainly a tall order.”

Andy also serves as Creative Director at Vital Arts, a nonprofit created for the purpose of honoring the victims of the Oakland Ghost Ship Fire. It aims to provide safe, affordable residential, work and performance spaces for artists.

Andy believes that reinvention and maintaining positive relationships, rather than resting on one’s past work, is the key to career longevity in the underground dance music realm. Nonetheless, many New Englanders will remember him as late 90s party-circuit staple “Andy Kaotik” of Boston’s “Audio Dream Control” and the force behind the “Wicked Sky” open air renegades.
W/S/G’s –

-OR- @ The Nectar’s Box office, during business hours (NO SURCHARGE)

** Though this event is 18+, if you are under 21, you will have to buy your tickets first come, first serve, on the day of the show at the club. This is Metronome’s policy due to the *limited number* of people under 21 allowed in, so please arrive early to ensure entry. **